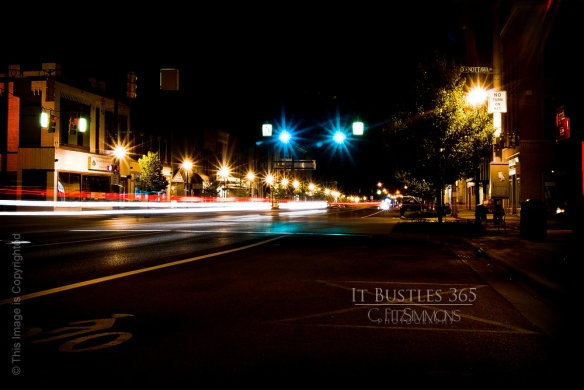 Now it’s over, and now it’s done;
Why does everything look the same?
Just as bright, the unheeding sun, —
Can’t it see that the parting came?
People hurry and work and swear,
Laugh and grumble and die and wed,
Ponder what they will eat and wear, —
Don’t they know that our love is dead?

Just as busy, the crowded street;
Cars and wagons go rolling on,
Children chuckle, and lovers meet, —
Don’t they know that our love is gone?
No one pauses to pay a tear;
None walks slow, for the love that’s through, —
I might mention, my recent dear,
I’ve reverted to normal, too.

•••
At long last, it is finished.  I finished where I started as planned from the very first shot.  And I am stunned at how the quality of my shooting has improved.  I never realized I had so much to learn.
And a good riddance to this 365…

First shot and final shot. What a difference a year makes…. 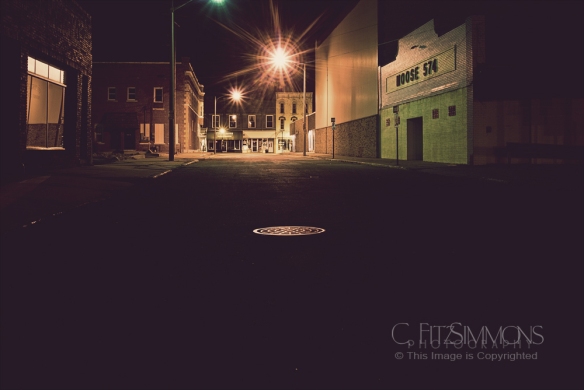 They Roll Them Up at Dusk

Say, they roll up the sidewalks all over town
by 11:30 p.m. Lord, by midnight there’s nothing
moving, doing. Lone streetlights glare,
one-eyed, but do not dare to dance.
Here and there late lamps burn pale
fire to keep back the beasts of the night.
Somebody’s sick, you think (like Huck),
or, less innocent, project the lewd
fantastic, the cheap old beams
and images from broken movies
into frail naked rooms. Alas
for the cop on the corner who offers
a glass-eyed stare, and for the last car
weaving the pavement like a lonesome drunk.
Dancer, giants, heroes and dreamers,
where are you now? It’s a fact–
when a heart breaks it doesn’t make a sound.

10:30 p.m. and not a soul on the streets except for me with my camera.  30 second exposure and not a single car to leave light trails in the frame.  Just the wind blowing, howling overhead, the sound of a trash can clattering on an adjacent street and dried up leaves chasing each other down the darkened sidewalk.

Is it any wonder that I love this small town so?

It Depends on What You Choose

The Road Not Taken by Robert Frost

Two roads diverged in a yellow wood,
And sorry I could not travel both
And be one traveler, long I stood
And looked down one as far as I could
To where it bent in the undergrowth;
Then took the other, as just as fair,
And having perhaps the better claim,
Because it was grassy and wanted wear;
Though as for that the passing there
Had worn them really about the same,
And both that morning equally lay
In leaves no step had trodden black.
Oh, I kept the first for another day!
Yet knowing how way leads on to way,
I doubted if I should ever come back.
I shall be telling this with a sigh
Somewhere ages and ages hence:
Two roads diverged in a wood, and I-
I took the one less traveled by,
And that has made all the difference.
Choices. It is all about choices.  I have made one or two of those in my life:  Moving to this area with my parents as a young woman, taking a job at a department store, not pursuing a higher degree in favor of moving up the ladder in retail, living with a man who was unsuited to me, going to a bar with a friend on a cold winter night.  Had I not made those choices, where would I be now, I wonder?  Would I be living the life young Cyndi had hoped for in a large city pursuing the artistic dream?  Would I be jobless and homeless far from the family who loves me?  Would I be happy?  Would I even be alive?
One decision:  To move to a small town in 1990 brought me to this place – to a job that I love, to a relationship with God that I never dreamed possible, to two children whose love overwhelms me and a man who I hope to grow very old with.
I like to think I made the best choice in the world. 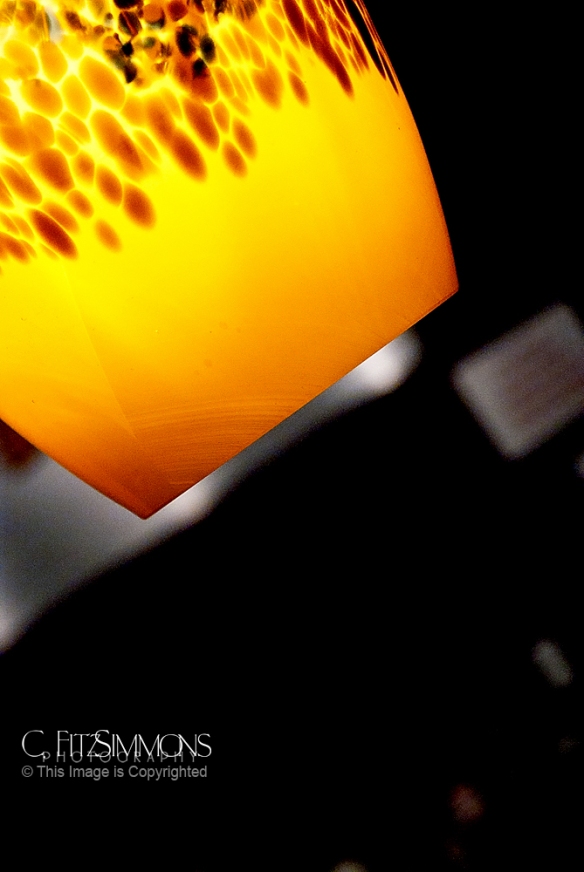 A man saw a ball of gold in the sky;
He climbed for it,
And eventually he achieved it —
It was clay.

Last night didn’t offer me much in the way of photo ops – it offered me body aches and general malaise, but that was about it.  I managed to get a shot of one of the glass light globes hanging in the café at the church and stuck a fork in because I was done.  I think that is enough about yesterday, because if I write more, it will just be complaining and who likes a complainer?  Not me!

A Little Bit of Sharp

Bells of gray crystal
Break on each bough–
The swans’ breath will mist all
The cold airs now.
Like tall pagodas
Two people go,
Trail their long codas
Of talk through the snow.
Lonely are these
And lonely and I ….
The clouds, gray Chinese geese
Sleek through the sky.
Oh, how I love playing “catch up.”  I spent the two hours at the church while Sami practiced, editing Christmas concert photos, practice photos from last week for the production and two days worth of Christmas tree photos.  This is a crystal garland my mother has draped in one of her Christmas trees.  I liked how the lights made it sparkle… 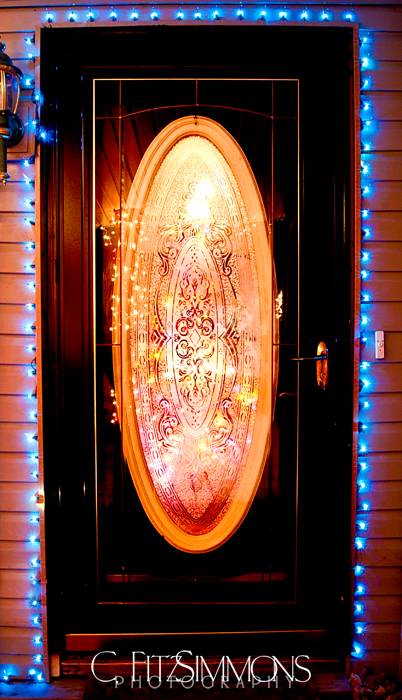 The House Of Dust: Part 03: 13: The half-shut doors through which we heard that music by Conrad Aiken

The half-shut doors through which we heard that music
Are softly closed. Horns mutter down to silence.
The stars whirl out, the night grows deep.
Darkness settles upon us. A vague refrain
Drowsily teases at the drowsy brain.
In numberless rooms we stretch ourselves and sleep.Where have we been? What savage chaos of music
Whirls in our dreams?—We suddenly rise in darkness,
Open our eyes, cry out, and sleep once more.
We dream we are numberless sea-waves languidly foaming
A warm white moonlit shore;

Or clouds blown windily over a sky at midnight,
Or chords of music scattered in hurrying darkness,
Or a singing sound of rain . . .
We open our eyes and stare at the coiling darkness,
And enter our dreams again.

So, I am really, really stretched thin right now.  I really had planned on pulling out some photos from the archives to post.  I just can’t do it.  So here is the view from the outside looking in on a dark, cold night.  The wind chimes were blowing; pretty but it sounds as cold as it feels outside at night right now.  I am a day late in posting, which I really do not like to do, but oh well!

Words of a poem should be glass
But glass so simple-subtle its shape
Is nothing but the shape of what it holds.A glass spun for itself is empty,
Brittle, at best Venetian trinket.
Embossed glass hides the poem of its absence.

Words should be looked through, should be windows.
The best word were invisible.
The poem is the thing the poet thinks.

If the impossible were not,
And if the glass, only the glass,
Could be removed, the poem would remain.

Today is a banner day for me.  I have set up accounts at three stock photo sites.  This is a huge personal risk for me.  I have never sold any of my work, and though I have done maternities, weddings and family shoots, I have never charged for any of those services.  Call me insecure, but I have just never felt my work and my equipment were worth charging for.  Well, I was told today that “time is money” by a photographer and friend whom I admire greatly.  If I sell anything, well, I will be upgrading equipment in an effort to make my craft easier and to improve my results.  But I am very, very nervous…..

A word of warning…

All work on this blog is mine. I am protective of my work and it is all copyrighted. I do not want you "pinning" my work to Pintrest and I do not want you to re-blog my posts without prior consent from me. No work is to be reproduced without prior permission. If I find that you have infringed on my copyright protection, I will pursue my rights to the full extent of the law. Thank you.